So far my time in Olorte has been very enjoyable. I have quickly adapted to the relaxed pace of Maasai life and am now very comfortable within my new surroundings. The wildlife in the immediate area surrounding the house is so varied it has been great getting to learn their sounds and calls. Things got off to a rocky start when I began trying to recognise the animal sounds and mistook a tractor for a hyena call but I am improving!! The colobus monkeys are a favourite of mine and come to sit in the trees right next to the house. They are extremely curious and very entertaining to watch.

The purpose of my visit to Olorte is to spend time at the Maasai Academy evaluating the success of COCO’s existing projects there; the classrooms, kitchen and sports pitch, discuss any potential projects which COCO could be involved with in the future and collect information to be used within casestudies. Over the past few days I have visited the school a number of times to see first-hand COCO’s work, be introduced to the staff and allow the students to become familiar with me. I was able to watch the school’s Friday assembly whereby all the students stand in a big circle and play games, sing songs and dance which was great. 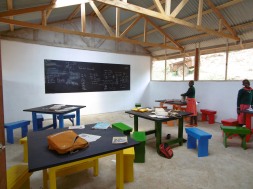 I had prepared a small activity to do with one class. I read them a story about a chameleon who painted all the animals in the jungle bright colours and patterns. I wasn’t prepared for the reaction I would get from the students. When I opened the page with a large picture of a lion half the class jumped up like they were ready to run away! Even the class teacher had to check with me that it was just a story! After the initial excitement/ fear from the students wore down they really enjoyed the story and I had organised a colouring activity for them to do afterwards, the pictures from which I will make into a wall display for their classroom.

Aside from spending time at the school I have been able to explore the local area and meet the community. I had the opportunity to drive with Hennie out to a small Maasai village right at the end of the road and one of the remotest villages in the community. I was invited into a house for a very large cup of very sweet Maasai tea. The house was built in the traditional manner and had only two rooms; a small bedroom and a room to cook, eat and relax in. At the centre of the room was a large open fire and only one tiny window for ventilation meant that the room was very dark, smoky and hot. I was happy to get back out into the fresh air but fully appreciated just how genuine the experience was. Outside of the house I met a couple of local children. I took out my camera to take a picture of them and then show them, something the children at the academy love, but

as soon as I took my camera out they ran away. Hennie explained that there are still superstitions about photos and some believe that when you have your picture taken part of your soul is swallowed by the camera!! It was incredibly interesting to visit such a remote village and get a better understanding of this very simple and traditional way of life.

I’ve also been able to explore my immediate surroundings on foot. I thought I would walk alone down to the river at the bottom of the garden as there is a small beach area which makes a great spot to watch out for wildlife. There is a very simple path straight down to the river which I missed so I ended up making my own way through the tangle of bushes and trees (the thorns here in Kenya are HUGE!) until I could see the river. There was a group of Maasai women doing their washing at the spot where I was planning on going so instead of scaring them by just emerging from the bush with my hair full of twigs I carried on further down the river. The river (when I eventually got to it) is a great spot for looking out for monkeys and some of the incredibly colourful birds around and a very peaceful spot.

I’ve also had the privilege to be taken on a walk up into the hills by Pelua, a local Maasai and also the bead-work manager. He took me to the highest point in the Loita Hills region and taught me all about the different trees and plants and their medicinal uses. We were also lucky enough to spot zebras, a wild pig, dik-diks and baboons as well as buffalo tracks and evidence of elephants. After 4.30 hours we returned back to the compound. I thought that was a pretty long walk, especially in the African heat, but I think for Pelua it was just a little stroll! The Maasai love to walk!

I’m coming to the end of my tenth full day in Maasai land and already feel like I have learnt so much! Over the next few days I will begin to carry out basic health checks on all the pupils at the academy and discuss potential future projects.